Mawlamyine (or Moulmein)is the capital of the Mon State in the Union of Myanmar. It is also the third largest city in the country. after Yangon and Mandalay. It has a population of about 240.000. Mawlamyine is an ancient Mon town. The name according to the legend comes from Mot-Mua-Lum. meaning “one eye destroyed” . In this legend an ancient king had three eyes. the third eye in the centre of the fore-head having the power of seeing what was going on in surrounding kingdoms. The King of a neighbouring country gave his daughter in marriage to the three-eyed king. and this queen was eventually able to destroy the all-seeing third eye. Mawlamyine is now being transformed into a modern city with many new public and private buildings coming up. Only the old pagodas on the Mawlamyine Ridge remind us of her ancient origins.

Three famous pagodas adorn the Mawlamyine Ridge. The Kyaik-thanlan pagoda was erected in 875 A.D. during the reign of King Mutpi Raja. A hair relic of the Buddha. Tripitaka manuscripts and gold images of the Buddha were enshrined in the pagoda. Successive kings raised the pagoda higher. from 56 feet to the present 150 feet. The present base of the pagoda is 450 feet in circumference. There are 34 small pagodas called Zediyan surrounding the pagoda. A lift has now been installed for easy access. Kyaik in Mon language means a Cedi or Stupa The pagoda was repaired by King Anawrahta. founder of the Bagan Dynasty. and later enlarged by Mon kings. especially King Wagaru of Mottama in 1538 A.D. On the Platform can be seen a big bell with a medieval Mon inscription and also another bell with a quaint inscription in English. dated 30th March 1885: ” This bell made by Koonalenga. the priest. and weight 500 viss. No one body design to destroy this bell.” There is also a memorial to the famous Thingaza Sayadaw who passed away in Mawlamyine in 1900.Kyaik-than-lan was the pagoda that the famous English poet Rudyard kipling wrote about in his poem “Mandalay” which opens with the line: By the old Moulmein Pagoda. lookin lazy at the sea”. 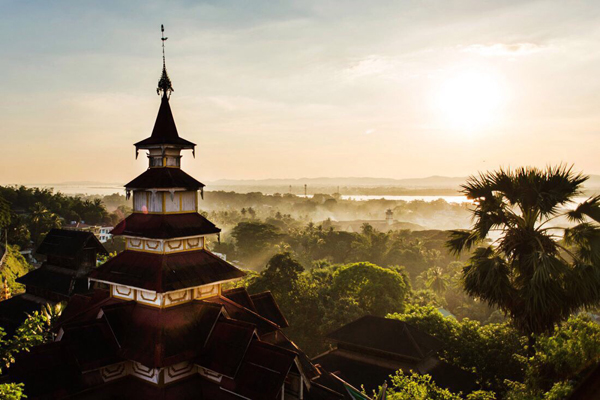 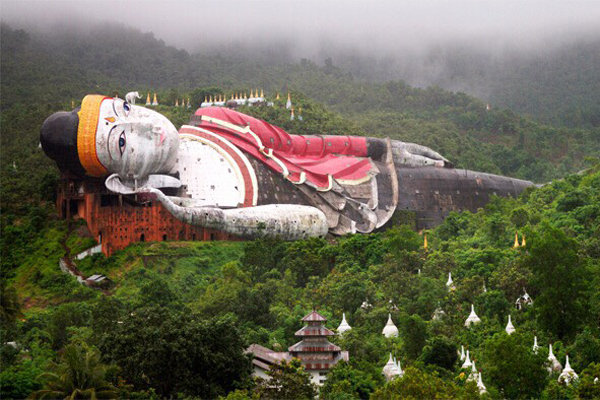 This pagoda is named after a person called U Zina but no one really knows who he was. Some say that U Zina was a sage who lived at thc time of king Asoka and that U Zina was just a villager who while collecting shoots on the hill where the pagoda now stands found a pot of gold buried in a bamboo grove. The villager and his wife became rich and built this pagoda on the hill which gave up its treasure to them. The old Mon name for this pagoda is Kyaikpatan. named after thc white hill on which it stands. Legend says it was first built in the 3rd century B.C.

There is a record that u lugalay and his wife Daw Mi rebuilt the pagoda in 1832. They were They were buried near a water tank to the north of this pagoda. Soon after the annexation 1886 the pagoda was rebuilt by U Moe and his wife Daw Nyein to the present height of 112 feet. Their stone inscription can still be seen on the platform.

There is a reclining Buddha Image. Visitors should also see the four life-like figures. a decrepit old man leaning on a staff. a man suffering from a loathsome disease. a putrid corpse and finally a monk in yellow robes free from all worldly cares. These four figures represent the four signs that made Lord Buddha leave the palace for the life of a religious recluse.

Directly north of Kyaikthanlan Paya and linked by a covered walkway, this is the largest temple complex in Mawlamyine and easily the most beautiful. It’s built in the typical Mon style with covered brick walkways linking various shrines. The highlight is the Bahaman Paya itself, a jewel-box chamber shimmering with mirrors, rubies and diamonds, and containing a century-old replica of its namesake in Mandalay.

Pa Auk Taw Ya monastery is located only 9 miles south of Mawlamyine. This is the one of the largest meditation centers in Myanmar. The monastery teaches sati patthana vipassana (insight-awareness meditation). Foreigners can visit for the night or several days.

Win Sein taw Ya monastery is situated about 20 km south of Mawlamyine. There has the largest reclining Buddha image in the world. The reclining Buddha is 180 meters in length and 30 meters in height. Inside there are many rooms with dioramas of the teachings of Buddhism and Buddhist shrine in one of the rooms and for a place of worship. It is the attraction place for the visitors.

Bilu Island (Bilu Kyun) or Ogre Island is located about 20 min long tail boat ride from Mawlamyine Strand Road. There are quite a few stories about the islands name. The best one might be that in the past people were so ugly and eat raw meat that they are considered to be ogres.

Bilu is large with over 60 villages on the island, rice paddies and rubber plantations and maintains a remarkable range of traditional cottage industries. The main ethnic groups living on the island are Mon people.

Kyaikthanlan Pagoda was built in 875 AD and enshrines the Tripitaka. The circumference at its base is 450 feet and is surrounded by 34 smaller Zediyan Pagodas. Kyaikthanlan Pagoda is the highest structure in Mawlamyine and stands 150 feet tall on the ridge overlooking the town centre. At the night time where it’s lighted brilliance dominates the skyline. You can see the whole of the city from the top of the pagodas.

On Strand Road, towards the Motta Ma Bridge end, is the Myo Ma Night Market. It has many shops selling different foods from traditional Myanmar foods, to barbeques with fresh fish, and even Indian food. We tried an Indian dish while there which the locals call Pan Thay Noodle. The smell was good but the taste was even better, just the right amount of spice.  There are so many options to choose from. Have some barbequed fish and a beer with the warm breeze blowing in from the sea, while watching the river view. Classic!

Just outside of Mawlamyine is the road to Kyite Ma Yaw Pagoda. Head out from the city and the Palm Trees Road will soon appear in front of you. The trees bend from both sides of the road, welcoming you with the smell of ripe palm fruits scattered on the ground.

Go there before noon and if you are lucky enough to meet the palm tree climbers, you will get to drink some fresh sweet palm juice. The locals believe it is only possible to drink the juice before midday. After that, the juice turns acidic, tasting bittersweet and becomes alcohol (great for the tree climbers who stretch their legs and enjoy a swig or two after a long day climbing trees). We went there around 10 am and luckily, saw the men climbing down from the trees carrying juice in elongated buckets.

Turn on your charm and ask if you can sample it, or take out your money and barter for a bottle of the juice. Fresh palm juice is just awesome! Oh, and don’t forget to bring an empty bottle because the locals don’t sell one unless you ask them to.

How to get Mawlamyine

Trains depart Mawlamyine’s rather grand new station for Thanbyuzayat , Ye and Dawei to the south or all points north to Yangon, including Thaton, Kyaikto (for the Golden Rock) and Bago. Foreigners are permitted to purchase tickets, and no longer have to pay in dollars or travel by upper class only.

If you’ve been making your way up the coast, then Mawlamyine suddenly offers some exciting transport options with no longer only up or down but now a sideways option available, with buses travelling east to Hpa-An.
Correspondingly the town has three bus stations. The main one lies off the highway east of U Khanti Pagoda and serves Yangon and points north. Then there’s the Dawei bus station south of town, where the highway leaves Mawlamyine for Thanbyuzayat. Finally there’s a small Hpa-An one off Bogyoke Lane close to city hall on the north side of town.