The Kakku is a pagoda complex in the hills overlooking the valley South East of Inle Lake. The remote site, only recently opened to visitors, is located in Pa-Oh territory, a people related to the Karen.

Due to its isolated location it takes considerable effort to get there. A scenic ride through the hills over small winding roads with Pa-Oh villages, houses of wood and bamboo and fields with crops as onions and garlic leads to the group of pagodas.

Some 2,500 pagodas, most of similar shape and size, are found in long rows closely put together in a square field.

At the center is the 40 meters high main stupa, surrounded by mostly well preserved smaller ones. Most still have the hti, a top element shaped like an ornamental umbrella. The centuries old pagodas are made from brick and plastered with stucco, a lot of which has crumbled off. Some of them have trees and bushes growing out of them.

Many stupas are adorned with well-preserved sculptures carved in stucco, some of which still show their original colors. A number of pagodas enshrine images of the Buddha.

Site may date back more than 2,000 years

Most stupas date from the 17th and 18th centuries. Some have been restored, not always skillfully, which takes away from the authenticity of the site. The Kakku site may date back to as early as the 3rd century BC, when the Indian emperor Ashoka built a great number of pagodas and monasteries across South East Asia.

The largest Kakku pagoda is believed to have been built by Alaungsithu, King of the Bagan empire in the 12th century. Alaungsithu was a devout Buddhist who travelled extensively in his Kingdom and built pagodas and Buddhist monuments across his empire to make merit and spread Buddhism. During the course of the centuries, many more pagodas were added. 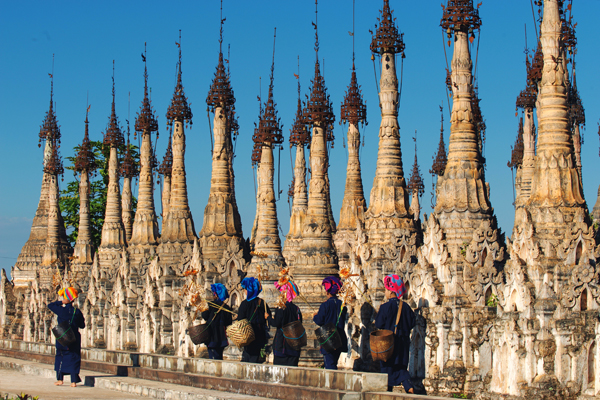 The Kakku Pagoda festival is held during Tabaung, the 12th month of the traditional Burmese calendar (March), which marks the end of the cool season. During the 9 day festival the Pa-Oh people dance in traditional costumes and bring food offerings and pay homage to the pagodas.

How to get to the Kakku Pagodas

The Kakku complex is located in the hills South East of Inle Lake. The 60 kilometer drive from Taunggyi takes 1½ to 2 hours; from the West end of the lake it takes another hour extra. Alternatively, a very scenic but challenging trek through the hills takes 5 to 7 hours, depending on the starting point. Near the site are wooden bungalows to spend the night. A guide is necessary; inquire at local travel agent or hotel. Next to the complex is a restaurant selling Burmese food.

Admission to the site is US$ 3 per person. To visit the site, visitors must hire a Pa-Oh guide in the town of Taunggyi, who charges a fee of US$ 5.