The name Ava, the most common Western transcription, comes from Awa of former Upper Burmese pronunciation. But, the modern standard Burmese pronunciation is “ Innwa “. The name Innwa literally means “ Mouth of the lake “. Another theory states that Innwa is derived from In-na-wa, meaning “ nine lakes “ in the area. The classical name of the city in Pali is “ Ratanapura“, which means “ City of Gems “.
It is located about 21 Km south of Mandalay and on the way from the Mandalay to International Airport near Sagaing City. It is surrounded by Ayeyerwaddy River in the north and Myitnge River in the east. It is popular day-trip tourist destination from Mandalay.
It’s an ancient capital of successive Burmese Kingdoms from the 14th century to 19th century. It was officially founded in 1364 by King Thadominbya on a man-made island created by connecting by Ayeyerwaddy and Myitnge Rivers. The construction of the artificial island involved filling in the swamp-lands and lakes. The kingdom with the capital founded by King Thadominbya at Innwa became known as the Ava Kingdom. 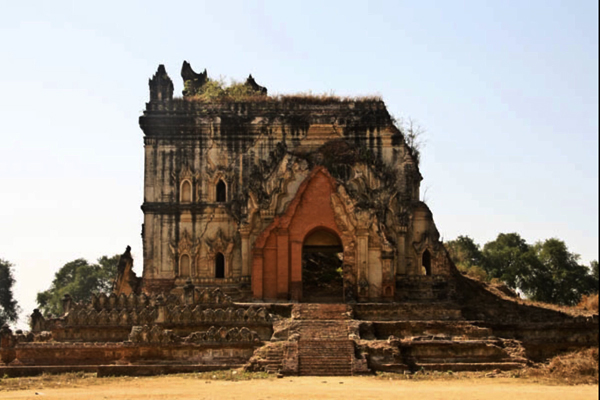 It came under siege in 1404-1405 during the Forty Years’ Civil War ( Mon-Bamar War of 1384 to 1424 ). In 1527 , the city finally fell to the repeated attacks by the Confederation of Shan State and Prome (Pyay) kingdom. It then became the capital of the unruly coalition until 1555 when it was captured by King Bayint Naung of Hanthawaddy. The city came to an end for 190 years. In 1599, King Nyaungyan restored the kingdom which had temporarily been disintegrated and King Thalun also moved the capital back to Innwa from Bago ( Pegu ) in 1365 as Nyaungyan dynasty. The dynasty lasted for about 152 years from 1599 to 1751. But, the city was sacked again in 1752, and subsequently burned down in 1753 by the forces of Restored Hanthawaddy Kingdom. King Hsinbyshin began the reconstruction of the city in 1764 and moved the capital from Shwebo to a newly built Innwa as Konbaung dynasty, the last dynasty of Burma. King Bodawpaya, one of the Kings from Konbaung dynasty moved the capital of Amarapura in 1783 but his successor, King Bagyidaw moved it back to Innwa for the last time.
Finally, the capital was abandoned after it was completely destroyed by a series of major earthquakes in 1838. It lasted as the seat of powerful capital for over 400 years. It, therefore, has a lot of historical monuments and Pagodas, some of which are already in ruins. Currently, the most popular tourist attraction sites of the city include Bagaya monastery with splendid Myanmar architecture, The Maha Aung Myae Bon Zan or Me’ Nu Oak-Kyaung ( Brick Monastery ) and the Watch Tower which is about 30m high. The massive fort walls and most of the splendor of the past can still be seen. Visiting with horse-drawn carts and countryside landscapes would be your fantastic and enjoyable sightseeing